The plant we know today as the poinsettia has a long and interesting history. The fact is, that lovely plant you place in your home during the holidays was once used as a fever medicine!

Native to Central America, the plant flourished in an area of Southern Mexico known as Taxco del Alarcon. The ancient Aztecs had a name for this plant found blooming in the tropical highlands during the short days of winter: cuetlaxochitl. Not merely decorative, the Aztecs put the plant to practical use. From its bracts they extracted a purplish dye for use in textiles and cosmetics. The milky white sap, today called latex, was made into a preparation to treat fevers.

The poinsettia may have remained a regional plant for many years to come had it not been for the efforts of Joel Roberts Poinsett (1779 - 1851). The son of a French physician, Poinsett was appointed as the first United States Ambassador to Mexico (1825 - 1829) by President Madison. Poinsett had attended medical school himself, but his real love in the scientific field was botany. Mr. Poinsett later founded the institution which we know today as the Smithsonian Institution.

Poinsett maintained his own hothouses on his Greenville, South Carolina plantations, and while visiting the Taxco area in 1828, he became enchanted by the brilliant red blooms he saw there. He immediately sent some of the plants back to South Carolina, where he began propagating the plants and sending them to friends and botanical gardens.

The poinsettia was first introduced into cultivation and commercial trade by Bartram’s Garden on June 6, 1829 at “The first semi-annual exhibition of fruits, flowers and plants, of the Pennsylvania Horticultural Society”. The owner of the commercial nursery at the time was Col. Robert Carr, married to Ann Bartram-Carr the granddaughter of the famous American Nurseryman John Bartram.

In 1834, Robert Buist, a Pennsylvania nurseryman introduce the plant to Europe under its botanical name, Euphorbia pulcherrima (literally, "the most beautiful Euphorbia"). Though it is thought to have become known by its more popular name of poinsettia around 1836, the origin of the name is certainly clear!

They are NOT Poisonous!

The widespread belief that poinsettias are poisonous is a misconception. The scientific evidence demonstrating the poinsettia's safety is ample and well documented.

Studies conducted by Ohio State University in cooperation with the Society of American Florists concluded that no toxicity was evident at experimental ingestion levels far exceeding those likely to occur in a home environment. In fact, the POISINDEX Information Service, the primary information resource used by most poison control centers, states that a 50-pound child would have to ingest over 500 poinsettia bracts to surpass experimental doses. Yet even at this high level, no toxicity was demonstrated.

As with all ornamental plants, poinsettias are not intended for human or animal consumption, and certain individuals may experience an allergic reaction to poinsettias. However, the poinsettia has been demonstrated to be a safe plant. In fact, in 1992, the poinsettia was included on the list of houseplants most helpful in removing pollutants from indoor air. So, not only is the poinsettia a safe and beautiful addition to your holiday decor, it can even help keep your indoor air clean! 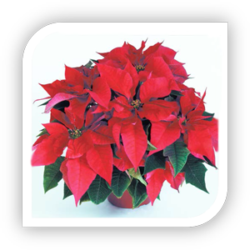